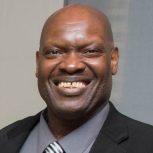 David Cherry is Senior Vice President/Youth and Community Development and City Leader of the All Stars Project (ASP) of Chicago. As a member of the Executive Leadership Team, David works with the ASP’s Chief Executive Officer on advancing the organization’s voice on public policy issues and advancing strategies for creative engagement on poverty, social justice, violence and other social issues of concern to impoverished youth and the communities in which they live.

Since the launch of the ASP of Chicago in 2007, David has used his 25-year history as a highly skilled and dedicated community organizer—together with an intimate understanding of the ASP’s approach to youth and community development—to implement two of the ASP’s leading programs: the All Stars Talent Show Network and the Development School for Youth. He is also working tirelessly to build the organization’s trademark partnership between business professionals and inner-city youth—a key to the growth of all ASP’s programs. In addition, David is a leader in convening community members, educators, innovators and others in Chicago’s afterschool arena and a key player in establishing an Afterschool Development Hub in Chicago, an important national growth initiative for the All Stars.

David is also President of the Leaders Network, an organization of faith and community leaders that advocates for social justice, serves on the board of Collaboraction, a performing arts organization, and is a member of the Cook County Social Innovation Commission’s Social and Human Capital Committee.

Born in Harlem, David grew up in the South Bronx just a couple of blocks from the once-infamous Charlotte Street neighborhood, a national symbol for the poverty and devastation of America’s inner cities in the 1970s.