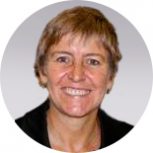 Jeannine Hahn is Senior Vice President/Organization Design and Change and a member of the Executive Leadership Team, where she works with the All Stars Project’s (ASP) Chief Executive Officer on risk management and compliance, as well as focusing on succession planning and leadership development for the organization. Jeannine is also Director of the ASP of Chicago, where she runs the day-to-day programming and operations.

Prior to her current position, Jeannine served as Senior Vice President/Chief Financial Officer (1992–2021) and Chief Operating Officer (1992–2020), during which time she oversaw ASP’s financial and human resource operations and worked with senior leadership on ensuring the organization’s short- and long-term growth and stability. Jeannine has a long history of contribution to the ASP that began in the late 1980s, when she produced some of the first All Stars Talent Shows in Boston, MA. In the early 1990s, she managed the organization’s door-to-door canvasing operation, generating over $800,000 annually and introducing thousands of donors to the organization. Jeannine’s fiscal guidance was crucial both before and after the ASP’s 2002 decision to purchase a 31,000-square-foot facility on 42nd Street in Manhattan and turn it into a performing arts and development center. In 2007, she led a team to refinance the mortgage, enabling a renovation of the center’s façade and mechanical systems. Additionally, Jeannine was responsible for overseeing the budget and schedule of the construction project.

Raised in Arlington Heights, Jeannine is a devoted Cubs fan. She attended school at the University of Iowa, where she received a Bachelor of Science in Education and played volleyball for the Hawkeyes.